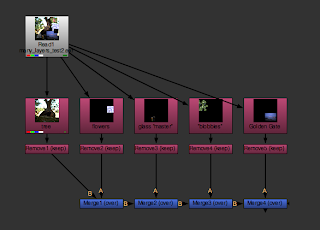 1. Nuke Comp Builder script
Since the beginning, files saved with ProEXR in Photoshop have contained a little blurb of data detailing the layer arrangement, transfer modes, and other things beyond the scope of the EXR format. ProEXR for Photoshop and After Effects could use this data to rebuild their project exactly as it was saved, but for Nuke you were forced to do it manually. Well, no longer—ProEXR includes a Python script that will read the data (requires Nuke 6.3) and build a comp for you. Linux users, download it here.

2. AE plug-in optimizations
A significant amount of work was put into the After Effects plug-ins to try to eke more speed out of them, particularly when reading layers using EXtractoR. I won't bore you with the details, but in some tests I've seen a 40% improvement. Feel free to swap these in for the ones that ship with AE. Don't worry, they're 100% project compatible with the previous versions you've already been using.

3. Memory Mapping
A new option has been added when reading files: "Memory Mapping." What this means is that the entire raw EXR file is loaded into a memory buffer before it is decompressed. Some users have found that performing one big read can speed things up tremendously on certain networks. Access this option from the input options dialog in Photoshop, or it can be set by editing the Preferences file in AE. More details in the manual.

4. Render layered EXR files from After Effects
This feature merits its own blog post, don't you think?
Posted by Brendan at 4:04 PM 4 comments:

New in version 1.6 of ProEXR is a new plug-in for After Effects: ProEXR AE. On one hand, this is the old ProEXR Comp Creator plug-in with a new name. But installing this plug-in also will add an extra option to your list of output formats.

Funny how sometimes one tiny little UI widget can indicate a whole world of possibilities. Yes, ladies and gentlemen, choosing "ProEXR Layers Sequence" will render all the layers of your After Effects comp into a multi-channel OpenEXR sequence. And of course each file will include our blob of layer data so it can be reconstructed in Nuke, Photoshop, or even back in AE.

Needless to say, this is somewhat beyond the scope of a typical After Effects file module, so perhaps it should be considered experimental for now. If it behaves oddly, please send email telling me so. And do remember that it follows the same layer naming conventions followed by the Photoshop plug-in (more on that in the manual).

To take advantage of this functionality, you'll need a ProEXR serial number. (It will run in trial mode for 15 days, like the Photoshop plug-ins.) You do not need a serial number to use the comp building functionality however.

Eagle-eyed visitors to the fnord OpenEXR page may have noticed that there's been links to the OpenEXR utilities for a while. These are programs that are included with OpenEXR in source code form, but unless you're a programmer you probably haven't been able to use them. Heck, even if you are a programmer you may not have bothered to build them, as doing so involves building FLTK, downloading the nVidia Cg Toolkit, and other chores. So I've done the work for you and posted the result.

There are some useful tools in here. For the reference implementation to see how an EXR should look, use exrdisplay. Or playexr can play back an EXR sequence in real time and let you adjust exposure on the fly. Another favorite is exrmaketiled for converting a regular scanline EXR into a tiled, mipmapped image for the benefit of a 3D program that can take advantage.

As I said, these were written by Florian Kainz and his team at ILM, not me. I'm just posting the binaries to give more people access to them. They are all run from a command shell, so time to get comfortable with it if you haven't already. I've just got Mac and Windows versions here—I figure you Linux hackers can handle building them on your own. Enjoy!

Here's a simple Photoshop plug-in for exporting the ICC profile from your document. Sometimes an ICC profile is embedded in a file you've received and you'd like to save it out and install it on your system. This plug-in will let you do that.

This code was originally part of a little collection called xMeta, now retired from the fnord web site. But here's the useful part, with a Windows version appearing for the first time. Free, of course. Enjoy! 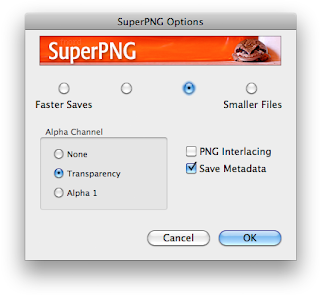 SuperPNG is the first plug-in I ever wrote. Back in 2002, Photoshop and After Effects had 16-bit color modes, but couldn't read or write a 16-bit PNG. So I set out to fill the void, learning a lot in the process.
Within a few years, Adobe filled the holes and I figured SuperPNG was destined for retirement. Working in visual effects, I also found myself no longer using a 16-bit integer format in production, preferring 16-bit float via OpenEXR. SuperPNG was all but forgotten—I didn't even have it installed myself.
But then the other day I went to save a PNG in Photoshop and noticed a glaring omission: no ICC profile support. I found it astounding that Adobe, one of the founding members of the ICC, had overlooked it in PNG. Time to dust off SuperPNG.
And then I have also gotten so accustomed to being able to control alpha channels in ProEXR EZ, I decided I had to add that feature to SuperPNG. So now the options dialog lets you choose between using transparency or the channels palette as the source for your alpha. Hold down shift when opening a PNG, and you get an import options dialog as well, letting you direct that alpha however you wish.
For more information, see the PDF manual, also new in this version. Quite an update for a free plug-in! 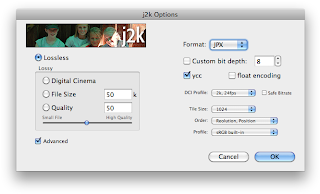 Have just posted an update to our j2k plug-in for Photoshop and After Effects. The main change is the addition of a "Digital Cinema" option when saving files. This will make JPEG 2000 files compatible with the DCI specification. From there you can use a tool like OpenDCP to finish the process of creating an MXF file ready for digital projection.

Also new is a real PDF manual. Of course, the plug-in is still free. Enjoy!
Posted by Brendan at 11:45 PM No comments: