Version 2.0 of ProEXR is now available. The major new addition is support for Cryptomatte in After Effects.

Cryptomatte is a clever improvement over OpenEXR’s ID channels, which have been supported by ProEXR since the beginning, but in practice are rarely used. The problem with an ID channel is that each pixel can only specify a single ID, so small things like antialiasing, motion blur, and depth of field won’t work properly. Using some tricks involving 32-bit float EXR channels and cryptographic hashes, Cryptomatte gives you the ID channels you always wanted, fully functional. Just turn on Cryptomatte in a supported 3D renderer, set up the comps in After Effects using ProEXR AE, select the Cryptomatte effect, and click in your comp to generate perfect mattes for any object(s) you choose.

Since Cryptomatte uses a series of EXR channels to work its magic, developing this plug-in exposed some inefficiencies in the OpenEXR file module, which has now been updated to always cache channels and headers. In extreme cases involving EXR sequences with many channels, the speedup can be as high as 20x. I encourage all multi-channel EXR enthusiasts to replace the plug-in that ships with AE.


Update: More information about this release and Cryptomatte in a ProVideo Coalition article by Chris Zwar! 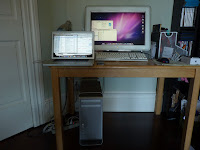 This blog has never before veered toward anything that might be considered opinion, but today I am making an exception. With no small amount of chagrin I heard recently that Microsoft had bought GitHub, and so I am now taking my open source projects off GitHub and moving them to GitLab.

I will be the first to admit I'm not completely rational about this. Perhaps a long-ago spurned lover of Barack Obama refused to vote him into office. Ghandi's ex-girlfriend may say he was a jerk. Well, I've been hurt by Microsoft, and if you use computers with any frequency I'd argue you've been hurt as well.