Eagle-eyed Adobe watchers who have read through the list of features in the next version of After Effects have seen that it will include version 1.8 of the ProEXR plug-ins. Yes, such a thing does exist, and I'm releasing it today. The next AE may not ship for a little while, but you can grab these plug-ins now and use them in whichever version you've got, all the way back to CS3.

This is a modest release, befitting a 0.1 version upgrade. The flashiest new feature is found in After Effects, something called channel caching. The quick explanation is that an EXR with many channels will read much faster if you turn it on (go to the Interpret Footage dialog and click the More Options button). More details in this blog post. 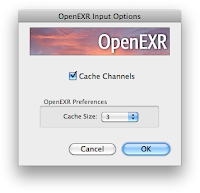 Version 1.8 also contains a year's worth of minor bug fixes, optimizations, and other improvements to all the plug-ins in ProEXR. And yet they are completely compatible with the previous versions, so fear not.

The update is free, as always. I recommend you upgrade ASAP.

How to read an OpenEXR file quickly

Over the past few years I've spent quite a bit of effort figuring out how to read OpenEXR files quickly, particularly files containing many channels. The short answer is that for maximum speed, all the channels in an EXR should be loaded using a single read operation. ProEXR for Photoshop has been doing this for a while; now with the channel cache, After Effects can do it too.

Continue reading for more than any sane person would ever want to know about the channel cache in AE.