Another six months, another two seasons, and another free 0.1 update to ProEXR. Version 1.7 includes some pretty nifty improvements and additions. They are:

1. Premiere Pro plug-in
OpenEXR is beginning to spread beyond the rarified world of 3D rendering and digital compositing. More and more it is being used to send images between editing software and color correction tools, and OpenEXR is also the foundation for the upcoming ACES digital cinema workflow. ProEXR for Premiere lets you import and export OpenEXR sequences in Premiere Pro. It supports timecode, all the EXR compression options, and takes advantage of Premiere's native floating point pipeline.

2. After Effects performance boost
More work has been put into getting performance gains out of the AE plug-ins. In some tests, the new plug-ins are twice as fast as what was released in version 1.6, which was already an improvement over 1.5, the version currently shipping in After Effects. The new OpenEXR, EXtractoR, and IDentifier plug-ins are project-compatible and free, so don't waste any time replacing your current After Effects versions with the latest and greatest.

4. VRimg support
Many VRay users convert their multipass VRimg files to OpenEXR and then open them with ProEXR. Now they can skip a step and open VRimg files directly in Photoshop and After Effects. (Both programs prefer you use the 3-letter file extension ".vri" instead of ".vrimg".)

A fact of life for plug-in developers is that a good idea for a plug-in today may become a new feature in the main program tomorrow. If you have saved an OpenEXR file out of the Photoshop CS6 public beta, you will have seen this dialog: 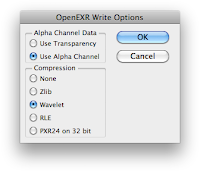 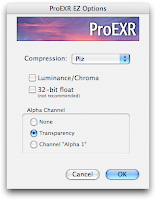 So thank you, Adobe, I'm glad that you decided to give Photoshop users some more options for saving EXR files. And I'm glad I could help them out in the meantime with ProEXR EZ, which I'm now making free. Download ProEXR 1.7 and run ProEXR EZ without a serial number, even in versions of Photoshop prior to CS6.

But even if you're using CS6 and don't need to read or write multi-channel EXR files, you'll still want to use ProEXR EZ instead of Photoshop's built-in OpenEXR module. Our plug-in has these advantages:


As a refresher, the following plug-ins are free in ProEXR:
The following ProEXR features require a license: