There have been some significant changes in the world of OpenEXR this year, so it's time to incorporate some of them into ProEXR. The changes are big enough that I felt it best to release 1.9 in beta form and leave ample time for testing and feedback. Download links and more details after the jump.


The changes in this version are:

The two major new features introduced in OpenEXR 2.0 are multi-part files and deep image buffers. Multi-part images should speed up the reading of just one layer in a file written in this fashion, as if that part were a separate file. Deep data is a totally different way of compositing which is not supported by After Effects or Photoshop, but ProEXR will flatten a deep image and read it in. Some samples of the new format can be found here.

Note that while ProEXR 1.9 can read files created with the new features in OpenEXR 2, the files it writes do not use the features, and are therefore backward compatible with programs that have not yet upgraded to the newest EXR library.

As discussed in this blog post, some EXR files use something called the displayWindow, and ProEXR AE has had a way to deal with it in After Effects. Unfortunately, this method is somewhat cumbersome, especially if you have a sequence with a changing dataWindow, as you often do with sequences rendered from Nuke. 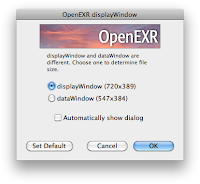 The After Effects file importer in ProEXR 1.9 can now properly position the image with respect to the displayWindow without any workarounds, and now does this by default. If you want to use the raw dataWindow as previous versions did, you have to enable the feature by editing AE's preference file, setting the "Enable displayWindow dialog" preference to 1. Once that has been done, hold down the Shift key when importing a file and a dialog will appear, letting you choose between displayWindow and dataWindow.

By the way, the EXR plug-ins that ship with After Effects have always been open source, but now they also have a good home up on GitHub.


So replace the plug-ins that ship with AE and whatever ProEXR you've installed in Photoshop, and take the new version for a whirl. Enjoy!

Im getting an error on start up of AE CS5.5

Hey JB, you get that error when you install the 32-bit version of the plug-in instead of the 64-bit version.